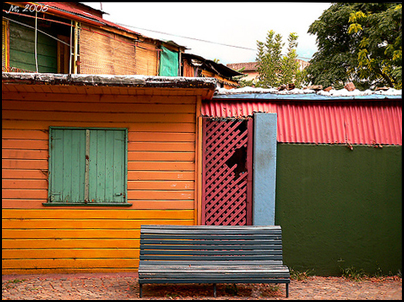 J. Hoberman has written about a million articles for The Village Voice, and in a recent one, we are introduced to what Hoberman characterizes as a blatantly operatic genealogical melodrama. Yes, it’s directed by Francis Ford Coppola, who has gone indie, and can do whatever the hell he wants — shoot a movie partly in black and white, have part of the dialogue in Spanish with English subtitles… it’s an art film and it’s called Tetro. Hoberman provides an overview:

Bennie Tetrocini, an 18-year-old waiter on a luxury cruise ship, takes shore leave in Buenos Aires, looking for his long-lost older brother Angelo, whom he has idealized as a successful writer. Now calling himself Tetro—short for the family name but also Italian for “gloomy”—the exile is holed up in the atmospheric port slum La Boca and is not exactly thrilled to see his baby brother.

In The New York Observer, Andrew Sarris notes that the movie was made on location “in the most picturesque and art-drenched neighborhoods in Buenos Aires.” “Made in Argentina,” says veteran reporter Larry Rohter in The New York Times, “mostly in Buenos Aires in the bohemian neighborhood of La Boca, with other scenes shot in Patagonia. Both locales, the one brightly colorful and the other spectacularly imposing, are unfamiliar to most Americans…. ” In The Los Angeles Times, Betsy Sharkey, whose recent inheritance of the film critic desk caused controversy, tells us:

La Boca, the brothers and the tale itself are bathed in the thousand shades of gray that black-and-white filming, and thinking, make possible. Color, when it comes, is surreal, splashes that tint the past and sometimes the experimental theater world of Buenos Aires that “Tetro” inhabits.

La Boca is a kind of picturesque, artsy barrio whose inhabitants are very aware of living in a special place.

Mark Jenkins feels Buenos Aires was chosen by Coppola for being “the Western hemisphere’s most Italian city,” and Xan Brooks says the film luxuriates in the sights and sounds of the city. Lisa Rose says, “The film captures Buenos Aires in such an such an interesting way.” I think what they’re all trying to tell us is, watching Tetro might be close to the next best thing to going there.

And — you guessed it — there is a Kevin Dolgin connection. Our multi-faceted travel writer has edited the online magazine Zoetrope All-Story Extra, which is of course a wing of Coppola’s Zoetrope Virtual Studio. And full of the best kind of fiction, the kind of which Coppola says, “Nothing in the story happened, but everything is true.”