Literary Tourism: Moscow and Beyond

Posted on July 13, 2009 by Pat Hartman | Comments Off on Literary Tourism: Moscow and Beyond 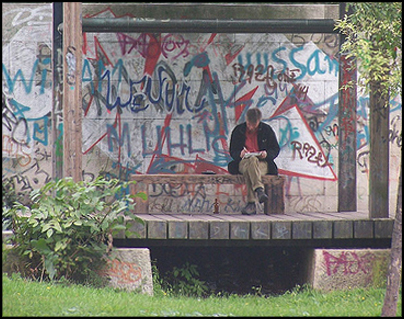 Vit Wagner engages in the purest kind of literary tourism. He travels to another place and, while there, reads a novel set in that place. His essay in The Star, “Journalist’s novel way of exploring the literary landscape,” goes into more detail:

If memory serves, reading The Sun Also Rises in Spain was pretty much the entire purpose of the trip – never mind that I had already devoured the Hemingway masterpiece at least three previous times. As luck would have it, the same adventure later took me to Paris where – since an important part of the novel is also set there – I read it again. Bonus!

In Havana, Cuba, Wagner stayed at the Hotel Sevilla, a place where both Graham Green and his fictional Our Man in Havana character used to hang out. He interviews a fellow named Ben Walsh, of Nicholas Hoare Books, which is in Toronto, Canada. Here’s the thing: the store hosts a book club of a very special type. For six months, the people read books about, for instance, India. Then, they go together on a trip to India.

The theory, and we’re quoting Ben Walsh here, is that literary preparation equips a person with “tools and skills” for a richer travel experience. The mental background “enhances acclimation.” He gives the example of Moscow, where literary tourists will look for a certain narrow alley that hides the entrance to a brothel. This is because they have read Mikhail Bulgakov’s The Master and Margarita, described here as a “devilishly sly satire” of Stalinist Russia. One of Walsh’s friends told him the novel is “a key that opens doors to so many conversations in Russia. People are excited that you’ve read books that they value so highly.” Kind of like how, in the Sixties, counterculture people bonded over their shared appreciation of Hermann Hesse’s Steppenwolf, or Robert Heinlein’s Stranger in a Strange Land.

The Master and Margarita, incidentally, is a work taken very seriously by a lot of very serious people. Aside from being funny, that is. It just might leap to the top of your must-read list, if it hasn’t already. We don’t have space here to explain why, but check out Jan Vanhellemont’s captivating multimedia website about it.

Naturally, we consulted the pages of The Third Tower Up From the Road, by our favorite travel oracle, Kevin Dolgin. He’s been to Moscow, too, and describes such spots as Manezh Square, where young folks like to congregate. “Between the trees are expanses of grass, upon which sit or lie couples in various stages of relationship-building, ranging from stilted conversation to sucking on each other’s tongues.” This is the in-depth, quality reportage for which we have come to count on him. He also takes us to New Arbat Street, which continues to be the same kind of “in crowd” part of town as it was in the Soviet days.

Which brings up another novel… Children of the Arbat, by Anatoli Rybakov. That would be a terrific one to read before going to Russia, or while there, or any time at all, actually.

But why should we have all the fun, matching up novels with destinations? This conjunction of fiction and actual travel interests us so much, we’d like to hear of some more examples. So please share your literary tourism memories…or fantasies.

photo courtesy of Photocapy , used under this Creative Commons license

Comments Off on Literary Tourism: Moscow and Beyond